75% of damage
Whitesnake is the first Stand that Enrico Pucci, the main antagonist of JoJo's Bizarre Adventure: Stone Ocean acquires, while on the path to obtaining "Heaven".

As a medium-ranged stand, Whitesnake possesses two ranged moves. Despite this, it displays strength similar to that of close-range stands and is capable of performing precise and deadly movements. With its unique abilities of acids and "DISCS", this stand can be extremely dangerous to fight when used correctly.

This Stand is a part of the Arrow Stand Pool, in which it has a ~0.7% chance (A-Tier percentage) of obtaining from a Stand Arrow.

As for its evolution, Whitesnake can be evolved to C-Moon (90%) or Shiny C-Moon (10%) by using DIO's Diary on the Stand.

Whitesnake is sparsely clothed in black and white, with a mask covering its face to the bottom of where its nose would be, in a piece that rises above its head by half its height in a row of peaks, resembling a crown.

Its light skin is marked by horizontal stripes of roughly an inch's height, with grey and white stripe surrounding its, legs and arms.

Its main colors are white and black, with hints of yellow on its accessories, such as its spikes. These spikes can be found on its neck, boots, thighs, and chest.

The player pulls out DIO's Diary and holds it up to the air. After a short time, Whitesnake will transform, granting the player Pucci's second Stand: C-Moon. However, the player has a small chance of obtaining the Shiny variant of C-Moon, Shiny C-Moon.

This evolution takes the same steps as previously. After using DIO's Diary on Whitesnake, the player has a 10% chance of obtaining Shiny C-Moon.

Your perspective when old Whitesnake use Acid Barrage on you.

A Stand Disc once retrieved by Whitesnake. 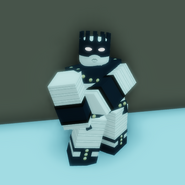 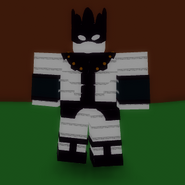 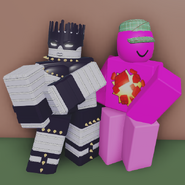 Whitesnake and the user menacingly posing. 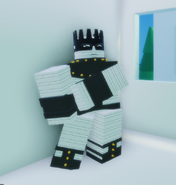