Behind waterfall near Tim's Shack.

Miniature figures of TheGuestToBlame (with Pot Platinum) and Tom Alternate Universe.
The Waterfall Room is a removed secret area localized close to the Soccer Field and the tunnel. In between these two locations, there is a waterfall. When a player walks through it, they will find the secret room.

Behind the WaterFall Room is located the Gang Lounge.

The Waterfall Room is a very tiny room and has three miniatures, being Pot Platinum, TheGuestToBlame, and Tom Alternate Universe standing next to a disc.

Inside of the room.

Pot Platinum, TheGuestToBlame and Tom AU standing next to a disk. 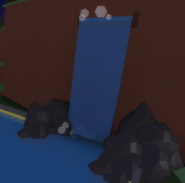 Waterfall room from the outside.
Community content is available under CC-BY-SA unless otherwise noted.
Advertisement