"To me, only the strong are real! Victory alone is just and admirable..." - Wamuu (Wamū, ワムウ)

80% of damage
Wamuu is one of the many Special Abilites added in A Bizarre Day that was featured as a main antagonist in JoJo's Bizarre Adventure: Battle Tendency.

For Wamuu, it is a spec that has many high damage and knockback dealing moves. Adding the fact that the spec also has very high mobility, this spec can be highly dangerous and powerful when its moves are used at the correct timing.

To obtain this spec, the user must use a Vampire Mask on the Vampire spec, in which they have a 1/9 chance (11.11%) of obtaining Wamuu.

Just like most Specs, Wamuu does not have a physical appearance, only having visual effects when the user uses their abilities.

However, when Wind Mode (Q) is activated, a spiral horn will generate on the player's forehead. While active, the player will see a red-colored outline of every opponent it senses.

Due to the fact that most of Wamuu's moves are wind or speed related, wind storm effects can be seen when the user spins, dashes, or jumps. As for the spec's "Wedding Ring of Death" ability, when hit, an effect of a brown colored gear can be seen inserted into said opponent's neck.

Wamuu as seen in the anime.

Wamuu as seen in the manga. 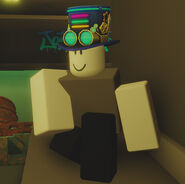