"You will never arrive at the reality that will occur! None who stand before me shall do so, no matter what ability they may wield!" - Gold Experience Requiem (Gōrudo Ekusuperiensu Rekuiemu, ゴールド・エクスペリエンス・レクイエム)

Because of the fact that this Stand was a shiny version, it had the same moveset from its counterpart, Gold Experience Requiem.

Volcanic Experience Requiem appears to have Gold Experience Requiem's old model, but with a volcanic design, similar to Retro Star Platinum Over Heaven and Volcanic Gold Experience. The colors black, white and orange are mainly used. It has lines around the body, and volcanic colored neon on its head, shoulders, fists, hips, and knees. Its most striking feature is that it has the head of a Requiem Arrow on top of its forehead. 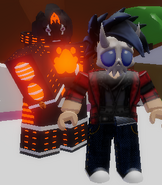 VGER idle.
Add a photo to this gallery

Retrieved from "https://a-bizarre-day-roblox.fandom.com/wiki/Volcanic_Gold_Experience_Requiem?oldid=630295"
Community content is available under CC-BY-SA unless otherwise noted.