When used, they deploy several spikes that pierce several points of the user's brain, soon turning them into a vampire. The spikes would deploy on the brain if it came in contact with blood. This item is obtainable by killing DIO, Dio Brando, or from Trowels, and cannot despawn or be bought in the shop.

Vampire Masks are grey, stone masks that bear basic facial features (eyes, nose, mouth) with the addition of a swirl pattern on the top right of it and a pair of small fangs/sharp teeth beneath the upper lip of the mask's mouth. The mask has spikes protruding from the sides. These spikes are used to be stabbed into the user.

By using a Vampire Mask, you will receive the Vampire spec, an opposite type of ability as Hamon. It has the power of a Vampire from the JJBA Anime/Manga series. This will also replace your stand if it doesn't have a vampiric evolution.

The player pulls out The Vampire Mask and holds it up to the air. The player then forcefully shoves the Vampire Mask into the user's face. Instantly, The World will ascend into its Vampiric form, granting the player: Vampiric The World. You can obtain this stand's shiny: The World Greatest High by using a Vampire Mask on Retro The World, the shiny counterpart of The World. 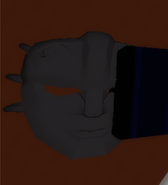 Stone Mask held by a player. 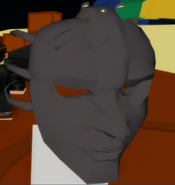 A 3D close up of the Stone Mask model.

Mask in the Sewers next to Dio Brando and the "sewage monster". 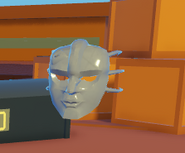 A Vampire Mask in the air. 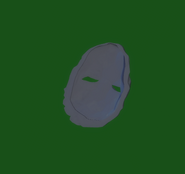 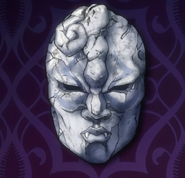 Stone Mask in the Anime.

The Stone Mask as seen in the Manga.
Community content is available under CC-BY-SA unless otherwise noted.
Advertisement