50% of damage
Vampire is a Special Ability that possesses superhuman strength and outstanding abilities in the game.

The Vampire spec is obtainable using the Vampire Mask, in which the spec would replace whatever ability the player currently possess, except for The World, Retro The World and vampire itself.

The appearance of a Vampire is basically just the player's regular avatar, with no specific appearance features or cosmetics added to the spec.

Vampire also has no visual appearance, however some of its movesets and abilities have effects to them. Vampire has a unique purple trail on its moves.

To get this spec, you must use a Vampire Mask while having the Vampire spec. There is a 1/18, or 5.8% chance of obtaining it.

This spec is obtained by using a Vampire Mask on Vampire. With a 2/18 or 11.1% chance of getting it.

Vampire might seem overshadowed by other stands obtainable from a Vampire Mask, like Vampiric The World and Kars, but it should not be underestimated in a 1v1. While Vampire doesn't have great durability or block, it makes up for it with its S in destructive power. Combos are easy to land and do massive amounts of damage. A good combo is Y + F + T which does around 50% on some stands. You can also add onto it using V, it's a great movement option and can allow you to approach opponents and add on to combos, such as Y + R + V + F + T and Y + F + V + E + R + T. Deadly combos when hit right can potentially insta-kill or get down to low HP. So this stand is definitely something you don't wanna mess around with, and is pretty fast, making it hard to dodge and attack. Overall, great combo potential that is easy to pull off doing amazing damage, but is lacking in Durability and Block.

If you're new to using Vampire, use this as a guide. 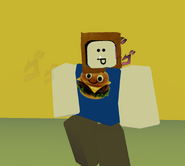 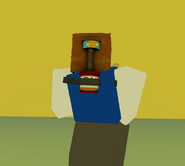