A Bizarre Day (Roblox) Wiki
Register
Don't have an account?
Sign In
Advertisement
in: Blog posts, Specs, Non-Stand,
and 10 more

is a me cause yes

“hehe is me” - The guy making this page

262.5 HP
The Defender of Chaos is a non-canon admin Spec belonging to Some_Wato, also having unique idle, run, jump and fall animations.

Due to it being not only being an admin Spec, being also fanmade, this Spec is unobtainable, and would only be accessible by the owner along with other ABD staff members, such as admins and developers other than Wato.

Unlike all the other admin abilities, the Defender of Chaos doesn't have incredible damage output nor large amounts of health.

The Defender of Chaos takes the form of a spiky reddish sword with a gray handle with a red gem on its hilt and a circular design on the guard, being the same as the UGC accessory Defender of Chaos by Inkwaves.

The user holds the Defender of Chaos differently to the other sword abilities, having a reverse grip rather than the usual forward grip in their idles.

When fighting a Defender of Chaos user, an easy way to kill them is hitting them while theyre approaching you or just simply spamming projectiles, as they dont have anything that gives invincibility other than their Parry move, and get ragdolled if they get hit by anything. They also can easily get caught in combos and barrages due to their No Guard passive, so stands like Star Platinum and The World (Alternate Universe) will destroy this spec easily. 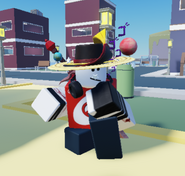 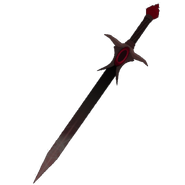