“Oppression, domination, slaughter.. I feel nothing but abhorrence for such things.” - Amakusa Shiro (Amakusa Shirō, 天草四郎)

This Stand is one of the strongest on the battlefield. With its highly damaging moves and highly mobile passives, this Stand can be very deadly.

King Crimson Requiem: Alternate Universe is a humanoid stand, with its upper body covered by a white cloak, and its abdomen having a white X on it. It also has a red hood with two triangular pieces protruding from it. On its belt, it has the shape of the head of a Requiem Arrow.

Its eyes are covered with a gray blindfold with a white diagonal four-pointed star with a red outline, and from its forehead emerges a raised level that bears a smaller, oval face of the same expression.

The aforementioned second face on KCR:AU's forehead is named Epitaph. Epitaph presents itself as a bump on the forehead featuring eyes and a mouth, often mimicking KCR:AU's current mood.

As for its shiny, Monochromatic King Crimson Requiem: Alternate Universe, the main difference is that it has a black rather than red, and it is monochromatic, befitting its name. 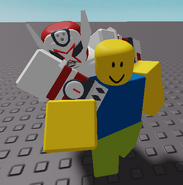 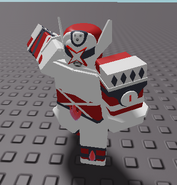