In order to obtain this form the user has to use a Requiem Arrow on it, which has a 1/4 chance to spawn randomly around the map every 37.5 minutes. Which then, you can press B while using Cracked Gold Experience and turn into Universal Gold Experience Requiem for 100 seconds.

Universal Gold Experience Requiem has a more translucent appearance, with the light usage of colors is what makes it look translucent. Its color scheme is mostly blue and white, with white stripes covering its legs, hands, hips, and knees.

Universal Gold Experience Requiem is a humanoid Stand, with many of its features resemble the original Gold Experience, including the ladybugs on its hands and the oblong grooves across its body. Its head extends into pointed tips with the back of the head hollow, giving it the appearance of a crown. Its eyes have a unique design among Stands, with the 'eyeballs' embedded in cross-like structure within slanted sockets. It has a requiem arrow-shaped object marked on its forehead.

It has an extended ridge collar on the back of its neck and several indentations and various other patterns covering its body. When it first appears, it wears the Arrow on its forehead; which eventually falls to the ground. Before, It was a darker shade of blue. Now UGER has a lighter blue and white appearance.

An example on how Passive B "You'll never reach the truth." works. 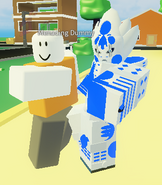 Universal Gold Experience and the user menacingly posing in the air. 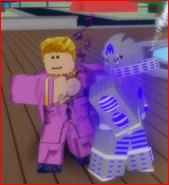 UGER's old pose.
Add a photo to this gallery 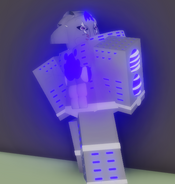 Volcanic Golden Experience Requiem (No longer obtainable as this stand got deleted). 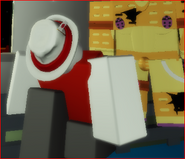 The effects of UGER's Return to Zero Ability.
Add a photo to this gallery
Retrieved from "https://a-bizarre-day-roblox.fandom.com/wiki/Universal_Gold_Experience_Requiem?oldid=427648"
Community content is available under CC-BY-SA unless otherwise noted.