A Bizarre Day (Roblox) Wiki
Register
Don't have an account?
Sign In
Advertisement
in: Locations, Landmarks, Pages Under Construction

Between the Beach and the Tim's Pawn Shop

Other than that, this location has nothing else important to it/no other special features in it.

Tutorial Shack has a basic design, outside, there is a rock path leading to the shack. The shack itself is very simply built. It is made out of wood, with two rectangular lights on the roof. As of v3.0.2i, a drink dispenser sits to the right of the shack, with no function other than decoration.

A banknote spawns on the place where the counter used to be. Since the shack was expanded, the banknote spawns in the air. This will probably be patched in a future update.

Behind the left corner of the stand, there is an evoker from the game Shin Megami Tensei: Persona 3. The handle has a blue line that is outlined with gold. It also has the acronym for the group the protagonist belongs to, S.E.E.S, marked along the side. 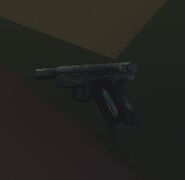 A closer view of the old evoker.

The Tutorial Shack at night.
Community content is available under CC-BY-SA unless otherwise noted.
Advertisement