This stand would of been obtained by using Jotaro Hat and can be transformed from Star Platinum. True Star Platinum looks very similar to Star Platinum, but some parts of it's design are different.

Star Platinum beats the target with an overwhelmingly fast (fastest barrage) barrage of punches with devastating power. This is the best barrage of all stands.

Star Platinum reaches out with its fingers to hit an enemy from afar, with a range of 10 studs. It deals incredible damage.

Star Platinum pulls out Iggy, and lunges him towards the enemy. The impact of Iggy hitting a target deals a godly amount of damage.

Star Platinum stops time for up to 3 seconds.

When this key is pressed during a Timestop, you can move within it for the next 3 seconds. This only works when Timestop is active, and has at most 10 second cooldown.

Star Platinum glides in front of its user and sucks in the air with immense force, able to pull in targets in front of it with a 10 stud-long range. This move can be held for up to 5 seconds. 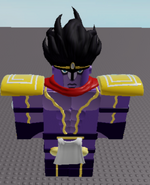 Sneak Peek 2 of TSP model
Add a photo to this gallery
Retrieved from "https://a-bizarre-day-roblox.fandom.com/wiki/True_Star_Platinum?oldid=441706"
Community content is available under CC-BY-SA unless otherwise noted.