A Bizarre Day (Roblox) Wiki
Register
Don't have an account?
Sign In
Advertisement
in: Locations, Landmarks, Secret Areas,
and 2 more

N/A
The Train Station was a hidden area that was located under the map.

This Train Station was accessible by jumping into a vent previously inside the Secret Sewer Room.

It was an underground metro with two parts: one was a waiting room, and the other was an (empty) shop.

This metro included a train that periodically arrives and departs. around every ten minutes. 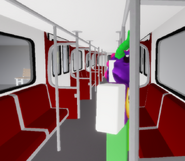 A player inside the train.

The first room of the train station.

The second room of the train station. 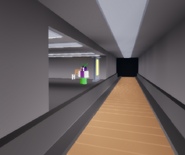 Rails where the train comes by.

The train passing through the tunnels.

Out of bounds view of the Station itself.

A view of the vent area.
Community content is available under CC-BY-SA unless otherwise noted.
Advertisement