"If you can hear me, I need you to keep an eye on Tim. He may be the reason that Dummyvilian is gone." -Tom the Dummy (Tomudamī, トムダミー)

Black
Tom was a tinpot-wearing merchant running Tom's Shack (previously A Bizarre Cranny, Tom's Thrift Store, and A Bizarre Shop). He was located being the counter in his shack, as he sells various items of varying usages and prices to different players that come across him.

When interacted/clicked on, Tom will say to the player, "Hey! Want to buy something from my shop? I've got all sorts of stuff!", before the menu of items (stated below) pops up.

As of the latest ABD lore update, Tom was captured by a group of unknown entities for unknown reasons. Tom later escaped and tries to contact the player via a Phone Booth, informing you to keep an eye on Tim.

As aforementioned, Tom wears a Tin Pot, which is likely due to the fact that almost every developer and Guest himself wears one. He also follows a similar colour scheme to these developers; white skin and pitch-black trousers, as well as a special torso colour. with his being a lime green colour.

He does have the unique quality of wearing a British pound sign, which is of the same colour as his torso and is outlined with thin, white strokes, as well as a happy, welcoming face. Tom's backstory, however, is unknown as the makers of the game have not stated a lot about this dummy.

Currently, he is being replaced by Tim. 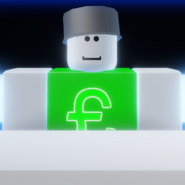 Tom seen in D4C's Dimension (an older version of Tom).

Tom wielding a sword (back when he owned A Bizarre Cranny). 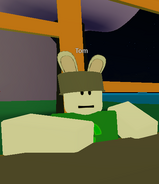 Tom as located in the cutscene. Taken by Noobthenoobertian.

Tom as a figure (v2.0.5h)
Community content is available under CC-BY-SA unless otherwise noted.
Advertisement