"With every choice you made, you become more of my servant." -N'Zoth (N'Zoto, ん・ゾト)

The Titan Void Walker, or simply known as Void Walker is a non-canon Boss that spawned on the map during the Live Event. Its origins are unknown. However, it is affiliated with the Void Walker Servants.

Its appearance is similar to the stand The Eldritch Horror, but with an enlarged model; it has fewer details than its counterpart. His skin is dark blue, he is wearing some pieces of what it seems to be armor on his arms and armor on his chest.

The most unique characteristic from the void walker is it's head, it's head has sharp teeth following with a huge mouth. Titan Void Walker has no eyes.

Initially, a Titan Void Walker is seen climbing the silo, used to be climbing the mountain behind the tunnel. He later got inside the silo itself.

After that he invaded the Beach, another Titan Void Walker later invaded the mountain near Tim's Shack . As in v2.0.7b, the Titan has been found near the silo, but not climbing it.

Void Walker kicks the ground with extreme force. It takes around 30% of your health, it will also knock you on the ground. The effect of this move is similar to Over Heaven Stand's Reality-Shattering Pulse/Bolt.

The Father Void Walker is the leader of the Titan Void walkers, they are also the leaders of the servants.

No physical appearance yet. 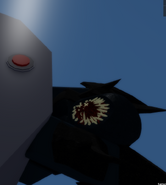 Void walker being seen on top of the silo.

A closer look at its face.

Titan Void Walker inside the silo.

Titan Void Walker voices when he invaded the Silo: