A Bizarre Day (Roblox) Wiki
Register
Don't have an account?
Sign In
Advertisement
in: Locations, Shops, Landmarks,
and 2 more

"My Radio got splashed by water on the way here- I mean, 'Buy something or get out!'" -Tim the Dummy (Timudamī, トムダミー)

Tim
Tim's Pawn Shop is a run-down shop that used to be owned by Tom but has been replaced by Tim. The shack is right next to the Tutorial Shack and near A Bizarre Park.

A previous instant of the shop was Tom's Thrift Store, the store in the 2019 map. It was also located next to the Tunnel.

The current person that is running it is an NPC merchant named Tim.

The shack was colored in red, but after the Halloween event, its color got changed to orange. Outside the shack, there's a wood sign written "Tim's Pawn Shop". Inside the shack, a wet radio is lying on the counter, which constantly plays several different kinds of music at a low volume.

There're 2 boxes lying at 2 left corner of the shop. There are plenty of shelves with boxes on them.

There is a Sword and an untextured Trowel on top of 2 shelves, and you can't buy or interact with them. There's also a dispenser machine at the left of the shop. You can't interact with it, though.

These are the items that are currently sold at the Shack:

These are the list of songs that play on the radio inside of Tim's Pawn Shop (all can be found on YouTube):

Inside view of the shop.

Another view of the inside.

Sword and Trowel on top of the shelves. 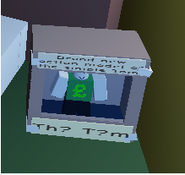 Tom in a box, at the side of the shop. 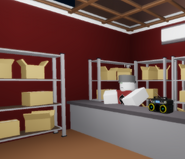 Banknote on the counter. (Old Version) 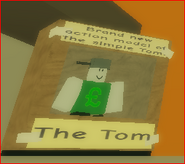 Behind the counter. An Action Figure of tom (Older version) 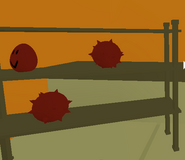 Easter Egg in the Easter Event