"Buy somethin' or get out!" -Tim the Dummy (Timudamī, トムダミー)

Green
Tim is an NPC found in Tim's Pawn Shop near where the Tutorial Dummy is. His purpose is to act as an NPC that sells items for the player.

When interacted, Tim will say:

Then, the shop will appear.

Tim wears a red shirt and a Tin Pot hat, resembling the Owner of A Bizarre Day, TORNADO98765.

Tim's facial expressions include a scar across the eye, and a crying expression. Tim has a more aggressive pose and demeanor than Tom. 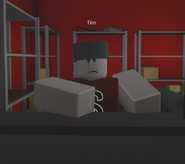 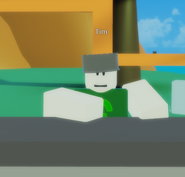 Tom, the old shop owner that got replaced by Tim.

Tim in the old map. 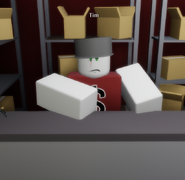 Tim in his old shop.
Community content is available under CC-BY-SA unless otherwise noted.
Advertisement