"Joestar blood suits me so very well! This is the greatest high!" - DIO, Part 3 (DIO, ディオ)

The World Greatest High can be obtained by using a Vampire Mask on Retro The World.

The World Greatest High is a humanoid looking stand, with a tall and muscular build, as it bears a striking resemblance to DIO in terms of clothing. It wears a headpiece covering its face to below the place of its nose, slanting at a steep angle from the base of its forehead to a peak situated above the rear of its head by about half its height. It also wears suspenders, leaving the face of an inverted triangle visible to the front; somewhat similar to the Red Crown of Lower Egypt.

The main difference of The World Greatest High's appearance is its color scheme, in which it has menacing red glowing eyes, red hearts, and a color scheme of dark to semi-light purples. It wears small twin diving cylinders on its back, connecting via short, twin-ridged cables to the rear of its mask; perhaps secured by thick, ridged, or puffed straps running from the rear of its waist over both its shoulders to its front.

The back of both its hands bears the shape of a simple clock face. Its chin, the base of its abdomen, its crotch, and its knees are topped by heart shapes. It has armor plates on its shins, and its clogs bear curved, sharply-pointed toes, similar to those of DIO's.

The World Greatest High is a stand that is quite good if used well. Your stand has good durability and good moves. It's really useful when used correctly, It's regeneration makes it really strong and its strong abilities also make it reliable.

Your R is something that should be used commonly if the player is a short-ranged Stand user. If they do not use Close-Ranged moves or Stand, you will have to use T and V. Your T has a low cooldown, thus meaning it can be spammed. Your B is a strong move that shouldn’t be used if a stand has a counter (Unless they time it bad). The blood suck can be used to help you survive longer.

TWGH using Road Roller.
Add a photo to this gallery

The World's Greatest High's color scheme, taken from the anime. 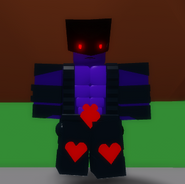 The World Greatest High's admin model.
Add a photo to this gallery
Retrieved from "https://a-bizarre-day-roblox.fandom.com/wiki/The_World_Greatest_High?oldid=430630"
Community content is available under CC-BY-SA unless otherwise noted.