"In this world, Johnny Joestar is my greatest test. And I will overcome that test and kill him without fail.” - Diego Brando From an Alternate Universe (Heikō Sekai kara Kita Diego, 並行世界から来たディエゴ)

The World (Alternate Universe), commonly shortened to TWAU, is the stand of the Diego Brando from an Alternate Universe. This stand was first featured in the arc High Voltage from JoJo's Bizarre Adventure: Steel Ball Run.

While its appearance is very similar to The World and Vampiric The World, the main difference between this stand and The World is its move-sets and abilities. It is a very strong stand if used correctly. You can defeat strong opponents with this, such as Dio Brando. This stand also has a shiny counterpart of itself: Neo The World (Alternate Universe).

It wears a headpiece covering its face to below the place of its nose, slanting at a steep angle from the base of its forehead to a peak situated above the rear of its head by about half its height, leaving the face of an inverted triangle visible to the front; somewhat similar to the Red Crown of Lower Egypt.

The back of its hands bears the shape of a clock with similar emblems on both its shoulders and hips. Its chin and belt region are decorated with hearts, while its knees are capped with D-shaped pads. On its back are twin diving cylinders, connected via short twin ridged cables to the rear of its mask; perhaps secured by thick, ridged, or puffed straps running from the rear of its waist over both its shoulders to its front.

The user calls out a white horse named Silver Bullet and is able to ride on it.

The user designates an enemy to attack. Glides towards the targeted player, and when close enough, strikes them with a slightly weaker MUDA Punch.

The user will throw a barbed wire in front of him, although that it doesn't deal too much damage as beartrap, it can still make someone stuck if someone stepped on it.

Unleash a flurry of punches dealing with moderate damage. This was replaced with the "Triple Punch MUDA Combo" move.

TWAU is a zoner-type stand that specializes in laying traps and yielding large amounts of high-damage projectiles. Besides, it’s also outstanding in melee, close-range combat, with the ability to stun lock with H and the large range of its E. In terms of melee and ranged tools, TWAU is essentially a direct upgrade from its original universe counterpart. Projectile placement and picking off enemies from a distance is essential if you want to main TWAU. Also please note that it does not have any passive regeneration, so rushing in carelessly will only be to your disadvantage.

This stand is The World but with a more substantial amount of projectile options. The ability to stop time brings easy kills to inexperienced victims. The knives and its revolver are some of the best projectiles in the game, with some of the largest range in the game, and the longest lingering. The kick move (H move) is an effective way of getting the upper hand over the enemy allowing a few melee attacks to lay in quite a bit of damage. This knowledge is not commonly known.

The user using Bear Trap.
Add a photo to this gallery 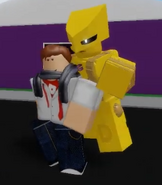 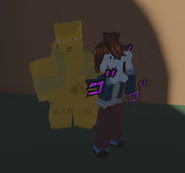 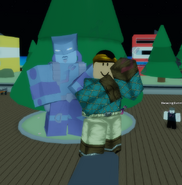 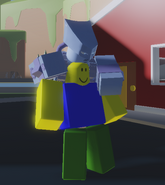 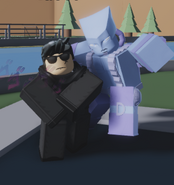 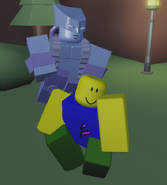 Neo The World: Alternate Universe's current pose.
Add a photo to this gallery 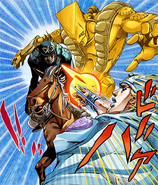 What NTWAU’s TS animation is based on. 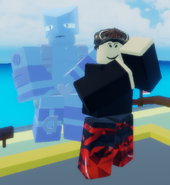 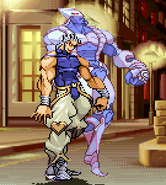 Neo The World in Heritage For The Future.

Neo The World in Eyes of Heaven.

Press Expand to see the list of sounds for The World (Alternate Universe).

When someone step on your trap:

When the user dies:

When you pull out your stand:

Retrieved from "https://a-bizarre-day-roblox.fandom.com/wiki/The_World:_Alternate_Universe?oldid=605664"
Community content is available under CC-BY-SA unless otherwise noted.