A Bizarre Day (Roblox) Wiki
Register
Don't have an account?
Sign In
Advertisement
in: Locations, Landmarks, Secret Areas,
and 3 more

Currently unknown; previously in the Ocean Missile Silo
The Fallen Star was a spherical red object floating in the sky. The sphere had a red, maroon-like color, although from a long distance it looks more grey or light blue. Not much is known about the red sphere other than that it was part of the Live Event.

On 5/5/2020, the star fell next to DIO's Coffin. A day later, the star started sending out massive vibrations that flung players away. 19 days later (5/25/20), the star was moved to the inside of the Ocean Missile Silo.

After the Live Event was concluded, the star was suspended between The Crystal and the Ocean Missile Silo; eventually, the star was removed entirely.

On 5/5/2020, a mysterious dialogue started playing from a mysterious source talking about the Fallen Star, Tim, Dummyvilian, and Tom. 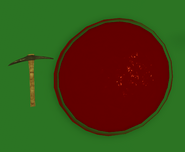 The Fallen Star and a pickaxe.

The Fallen Star missing a piece.
Community content is available under CC-BY-SA unless otherwise noted.
Advertisement