50% of damage
The Emperor is the Stand of Hol Horse, a minor antagonist featured in JoJo's Bizarre Adventure: Stardust Crusaders.

As a gun Stand, The Emperor functions as a weapon for the user. One of its main and most dangerous ability is its ability to freely control the trajectory of its bullets as they are also a part of the stand. This Stand also has a shiny counterpart of itself: The Lugermorph.

The Emperor is a Stand in the form of a standard looking gun. However, it also has some futuristic elements in terms of its appearance. Such as the purple circle on it.

A metal frame covers the long barrel, under which is positioned a cylinder with no apparent use, as it is not connected to the barrel. The stand is also summoned directly into the user's hand. The gun has no sight, and a large purple sphere is combined in between the gun hammer and the barrel. It also has a smaller revolver barrel below the metal frame.

Overall, its design is basically just a revolver combined with an automatic pistol. The Emperor is portrayed as being silvery in most media, including the colored manga and anime.

As for its shiny, The Lugermorph comes from the TF2 item, with the same name, The Lugermorph. Like any other shiny it's basically the same as the original, except for when you hit someone, Team Fortress's Hit sound (the ding) plays.

This stand (despite what others may think) is very capable in battles against even the toughest stands. Its abilities are all similar in sound and animation when it comes to long-ranged attacks so people don't know whether its the big damage F move coming their way for a simple left-click or even some who think you do basically no damage at and not knowing what your traps are all leaving a lot of mind play to be used against anybody you fight.

Now at the start of ANY fight, you put down your glass shard (H). This move is the WHOLE reason The Emperor can compete with the likes of Over Heaven stands or stands without many ranged options as it allows them to be unable to get close and lets you use your LMB, E, R, and F. If they can't manage to deal with you quickly and stay away from the shard, you can keep placing shard and stacking up the damage dealt if they finally break and step on them. This will cause godly amounts of damage, quite possibly be able to kill them in one go, if they're around half health. Also, make sure to save your F for when you're trying to escape and have to dodge out of range of the opponent's attack using either your T or just a jump and roll. You can also use this when your opponent is standing still (Shadow The World eye laser charge for example) or if you are confident you can read where they will roll, it could lead a lot of damage given out. This hit and run stand is very annoying to deal with and heavily underestimated as it seems like a cowards stand. However, the reality is frightening that if used right, there are very few stands who even come close to this one's versatility, damage, and annoyance to deal with.

The only things that will give you trouble are stands with good ranged attacks and healing like The World Over Heaven which will just heal some of the damage you have thrown out at them unless you can consistently hit your shots while avoiding theirs. Time Stops and RTZ can be an issue since you have only one option to dodge attacks, which is your T (which isn't even a good option unless timed correctly). But the one thing you must watch out for is Spin as its projectiles can be spammed faster than yours for longer AND be redirected. 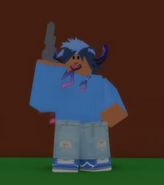 Emperor and the user menancingly posing. 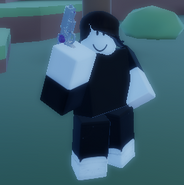 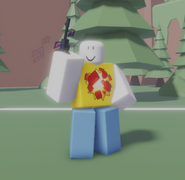 A closer look at the newly remodeled Emperor. 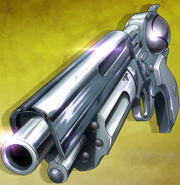 Emperor in the anime. 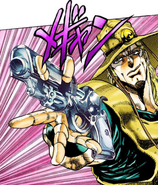 Emperor in the manga.