The Eldritch Horror is a stand available for in-game developers. This means that you cannot obtain it. A developer once said in a server that it is like King Crimson Over Heaven but with zero cooldown.

Thanks to this passive, you can move in timestop.

Thanks to your stand skin being of an unknown material, you will get a godly amount of HP.

E + Hold - The Arms of Nyarlathotep

A barrage that deals 8 dmg per punch.

R - The Lurker at the Threshold

An uppercut that deals a godly amount of damage.

The user dodges all incoming attacks.

Note: Requiem and Over Heaven stands completely disregard this move.

Grab and suck the blood of an opponent damaging them and healing you.

The Eldritch Horror "erases" time for as much as he wants.

A closer look of The Eldritch Horror.

A closer look at The Eldritch Horror's Tentacle. 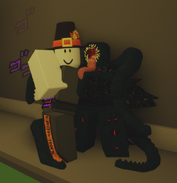 Please hit "expand" to see a list of sound.

Retrieved from "https://a-bizarre-day-roblox.fandom.com/wiki/The_Eldritch_Horror?oldid=488032"
Community content is available under CC-BY-SA unless otherwise noted.