Contained next to Nado in the Peaceful Park.
TheGuestToBlame is the old owner of ABD and he appears as an "easter egg" located in Peaceful Park sitting next to Nado. He doesn't have any purpose, you can interact with him unless it is the guest not inside a jar. Upon interacting with him, he said:

In Appearance, TheGuestToBlame is a humanoid character with a pot hat similar to how the Menacing Dummies have. His color scheme is very similar to the rest of the NPCs, having a menacing blue shirt, black pants, a pot on his head, and inside a jar. 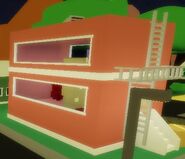 Building where TheGuestToBlame is located. 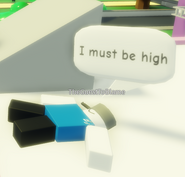 First model of him in the map update.

Guest inside of a jar. 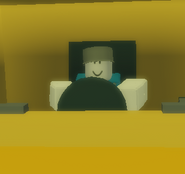 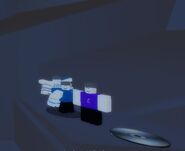 TheGuestToBlame behind the river with Tom AU in the new map. 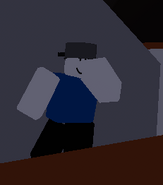 Mini Guest doing the Hamon pose in the Halloween map. 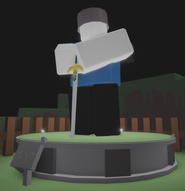 TheGuestToBlame's statue.
Add a photo to this gallery
Retrieved from "https://a-bizarre-day-roblox.fandom.com/wiki/TheGuestToBlame?oldid=604738"
Community content is available under CC-BY-SA unless otherwise noted.