"Didn't you say that everything should have a name? I want to give her a name too... Stone Free... because I want to be free from this 'Stone Ocean'!" - Jolyne Cujoh, (Kūjō Jorīn, 空条 徐倫)

Stone Free, commonly shortened to as STF or SF6 is the stand of Jolyne Cujoh, the main protagonist of JoJo's Bizarre Adventure: Stone Ocean.

Stone Free usually manifests as an ability that unravels the user's different body parts into a string, but ultimately has a base form of a powerful close-range humanoid Stand.

This stand is a part of the Arrow Stand Pool, in which it has a 4% chance (A-Tier percentage) of obtaining from a Stand Arrow.

Stone Free wears what appears to be a pair of green sunglasses varying in darkness, obscuring vertically ridged eyes.

Cones truncated at a length of one-third the width of its head protrudes from the region of the ears. It wears elliptical shoulder pads with a snakeskin-like pattern, and dark colors.

Several patches of its lightly-shaded body reveal a fibrous interior, wound horizontally. Its forehead, neck, arms, and the area from its midriff to the top of its feet bear small, evenly spaced studs/bumps. Composed of string, when unravelled its texture is like silk, apparently smelling of soap. Stone Free is portrayed in most media featuring it as being cyan. The string itself is portrayed as white.

The user using Uppercut.
Add a photo to this gallery 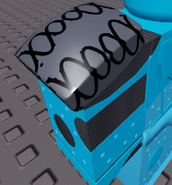 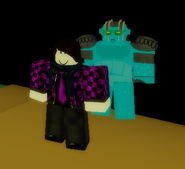 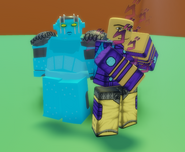 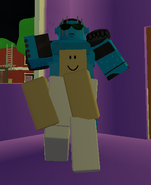 Stone Free and the user menacingly posing.
Add a photo to this gallery

Retrieved from "https://a-bizarre-day-roblox.fandom.com/wiki/Stone_Free?oldid=432466"
Community content is available under CC-BY-SA unless otherwise noted.