"The most repulsive form of evil is to exploit innocent people who don't know anything, and to use others merely for one's own gain!" - Bruno Bucciarati (Burōno Bucciarati, ブローノ・ブチャラティ)

50% of damage
Sticky Fingers is the Stand of Bruno Bucciarati, a core ally featured in JoJo's Bizarre Adventure: Vento Aureo.

Sticky Fingers is a mid-range Stand whose excellent strength and speed make it suitable for close range combat. In addition, it possesses a very versatile ability in the form of its zippers. Sticky Fingers' primary ability is to create zippers on any surface it touches with its fists, which it can remotely open or close at its command.

This Stand is a part of the Arrow Stand Pool, in which it has a 1.4% chance (B-Tier percentage) of obtaining from a Stand Arrow.

Sticky Fingers is a humanoid Stand of a height and build similar to Bruno Bucciarati's. Its face is hidden apart from the mouth by a helmet-like covering adorned with a mohawk-like row of short spikes.

Its body is covered in a white bodysuit, with its chest and stomach exposed, and has pieces of padded armor over the shoulders, arms and wrists, knees, and feet.

Zippers varying in size hang from the base of its neck and abdomen, the back of its hands, and the top of its feet. Most media featuring Sticky Fingers portray it as being white and blue.

Sticky Fingers (shortened to SF) is a fast and high DPS Stand. The passive allows extra damage which can help kill your opponent. You are going to want to use your T a lot in battles since it is one of the moves with the most range and the lowest cooldowns. Your Z is a great combo starter since it stuns and can be used to bait your opponent by going towards them and turning back. It also lasts long enough to catch up to a lot of other movement abilities, such as MIH’s Z, since it can go further. Do not rush in with your E, your barrage is good but can be outclassed by a lot of other attacks due to your low durability. Your F slows down your opponent and can bypass block, allowing for more combos.

While there are strengths, there are also weaknesses. As stated above, SF lacks both long-ranged attacks and durability. Your Z can easily be blocked or countered, for example, a STW can shoot projectiles at you while running at the same time. Your V is also punishable, since it has delay after you teleport, so try to be careful when using it. Note that other high DPS Stands are your counter such as Stands like MiH, King Crimson, or other combo Stands that can easily kill you. Against a GER, try to avoid their RTZ by using T to poke while still keeping distance and Z to jump out of it and counter back as GER can easily decimate your HP.

If you’re new at Sticky Fingers, use this as a guide. 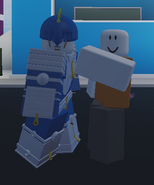 Sticky Fingers and The User posing.

Sticky Fingers as seen in the anime.