"Really getting through to someone is an amazing thing, but sometimes there's a little leftover mess. That mess is called resentment." - Jotaro Kujo (Kūjō Jōtarō, 空条 承太郎)

Similar to Star Platinum, this Stand shares a lot of resemblance to its respective counterpart. However, some of the movesets and abilities of this Stand are different from the said Stand. The Stand also has a shiny version of itself, named Star Platinum: Ocean Breeze.

Star Platinum (Stone Ocean) is a humanoid Stand, resembling a tall, well-built man. A wavy line runs from each arm to the front of its torso, continuing down its legs.

It has a minimal range of clothing and armor, including a short, circular yellow scarf, shoulder pads with a spiral design, long gloves with studs on the back, knee and elbow guards, a loincloth, and short boots, which became knee-length in part 6 Stone Ocean.

However, since Star Platinum (Stone Ocean) is different from Star Platinum, some of the notable differences are on its appearance is the color of its skin, pauldrons, and scarf. Its face and body have varying shades of purple. It has long, flowing hair with a darker shade above its eyes and on the bridge of its nose, blurring the distinction between its hair and head.

As for it's shiny, Star Platinum (Ocean Breeze), it's main difference is the skin color, being a green-blueish color, as well as it's scarf's color being red instead of yellow, and some of the yellow parts of SPSO being a bit more golden color with SPOB, and the color scheme is more in line with HFTF and All-star Battle.

Star Platinum Stone Ocean might seem like a weakened, old SP at first, with a very bad durability, but once you look further into the Stand, it is quite durable, and it has a lot of difference to old SP. First of all, your most important combo will be V + R, just like Star Platinum - The World, however, SPSO's V is a teleport move instead of a dash, making it less predictable. Your Y move is probably the best move in the game due to it being unpredictable, a combo finisher, and basically free damage. But the most important part of SPSO is that it has insanely low cooldowns, an example being its R move, having only 3 seconds of cooldown. Overall, SPSO is a really strong Stand that shouldn't be underestimated at high level play, and has a lot of good matchups against most of the Stands and specs in-game.

V is a move that should be always used during any sort of PvP, since it's a very good movement option, and you can use anything after the teleport. Your T move, the spear throw, is an insanely good projectile, it's not too fast, but it can act as a combo starter. It also has only 15 seconds of cooldown while dealing 45 damage. Star Pull is also a good combo starter, however, it is quite slow, so only use it when you know it will land. Lastly, Time Smite is an amazing move, but you shouldn't throw it out randomly. Instead, try using it as a combo finisher, since during combos most people won't be able to evade the move or block it.

Star Platinum Stone Ocean is a generally fast Stand that can do insanely quick combos and rack up a ton of damage in mere seconds. So here are few ways to counter this Stand: 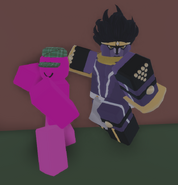 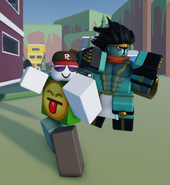 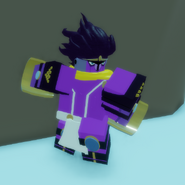 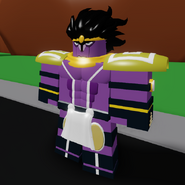