A Bizarre Day (Roblox) Wiki
Register
Don't have an account?
Sign In
Advertisement
in: Stands, Shiny, OVA Variants,
and 11 more

"Now if I just wait until dawn, you'll turn into dust. There's only one reason why you lost, DIO. One simple answer. You really pissed me off." - Jotaro Kujo (Kūjō Jōtarō, 空条 承太郎)

Star Platinum is a close-range Stand, but with incredible strength, speed, and precision much like The World. Along with its high-damage dealing moves, it can be considered a powerful Stand when used well. This Stand also has a shiny counterpart: Retro Star Platinum.

Star Platinum is a humanoid stand with the build of a strong human. It has long hair that flows to the back of its head, with a golden headband keeping it in position. It has dark shades below its eyes and on some parts of its face making it so that the head and eyes are distinguishable.

Its skin and appearance often surround the color scheme of purple and small bits of gold on its armor, legs, knees, and headband. It also wears a red scarf around its neck.

As for its shiny, Retro Star Platinum uses the model of Star Platinum before its rework. However, the difference mostly lies in the color scheme of the Stand, as it is mostly interpreted as being composed of pale colors like its light blue skin and it overall having a blue color covering it, while its emblem is red, unlike its normal version, it wears a light blue scarf, matching its skin.

Star Platinum is a melee stand. Its Y is good for a combo starter, as such you can do Y, then F for a short combo. Its teleport can allow sudden attacks, to teleport closer to your opponent or to get away from them. Star Finger has longer range then your other melee moves, and it can deal with crowds (F, then spin around). The Knife Throw can be used to get closer to your opponents, however it can be very hard to hit it at times. This stand can also counter time stop with its Timestop Override, but note that other Star Platinum can override your time stop as well. Blood Lust is a good way to deal extra damage; however it's best to deal damage instead of purposely making yourself low. 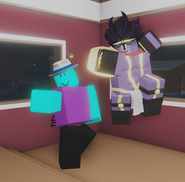 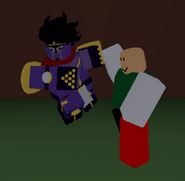 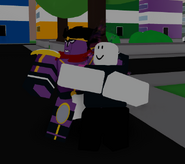 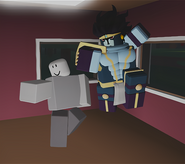 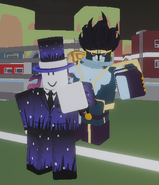 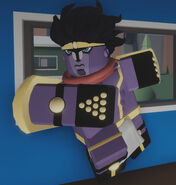 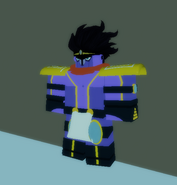 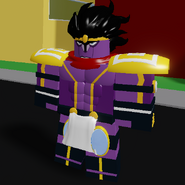 Star Platinum in the Anime. 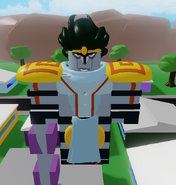 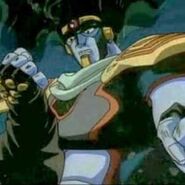 Star Platinum in the OVA. 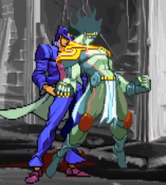 Retro Star Platinum in Heritage for the Future.