"Toss it! Believe in Spin! The power of rotation is limitless! Trust in that!" - Gyro Zeppeli (Jairo Tseperi, ジャイロ・ツェペリ )

50% of damage
Spin is a supernatural phenomenon ability wielded by Gyro Zeppeli and Johnny Joestar, both of which are characters featured in JoJo's Bizarre Adventure: Steel Ball Run. This is essentially the alternate universe counterpart of Hamon.

Said simply, Spin is used to rotate objects or even people, in this case, steel balls. That rotational energy that spin produces, is then transferred to nearby objects (the steel balls) in the form of vibrations which is then thrown at the target in order to deal damage.

Spin is a Special Ability that can be bought from Gyro Zeppeli for $10,000.

Spin doesn't have much of a physical appearance, except for two pouches carrying steel balls on both of the player's hips. However, when the user shoots its steel balls, a green object is shot out, with it being a steel ball. Once the ball is shot out, the projectile will leave a green trail behind it with a small green glow showing once the target is hit. The trail will be golden when using Golden Spin Energy.

Moves like the Spin-Infused Jab, Water Channeling, and the Golden Spin Energy all have their own effects when activated.

Similar to the visual effects of the steel balls, the user will build up a green glow in his hands before hitting the target. With water channeling, the user builds up a spiral of light blue water with its hands and Golden Spin Energy makes its user have a gold aura surrounding him/her while its steel balls glow gold instead of green.

Perform a chop with Spin infused dealing superior damage. A glass sound can be heard if hitting an opponent.

A punch that deals good knock back and incredible damage. The animation is similar to Hamon's Scarlet Overdrive.

The player pulls out the corpse to the air. After the animation, the player will respawn and be granted the stand Tusk, which is Johnny Joestar's stand, the protagonist of Steel Ball Run. The player would need to keep using the Holy Corpse on Tusk until it reaches its final form: Tusk ACT4

Spin ball being redirected by the Rotational Redirection.

The player's leap being infused with Spin Energy. 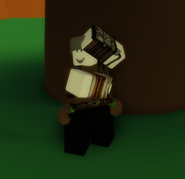 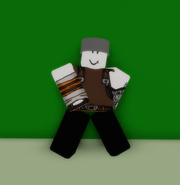 The teaser for Spin.