"Soft & Wet... When my soap bubbles pop, they take something away from you." - Josuke Higashikata, JoJolion (Higashikata Jōsuke, 東方 定助 )

Soft and Wet is the stand of Josuke Higashikata, the main protagonist from JoJo's Bizarre Adventure: JoJolion. Originally belonging to Josefumi Kujo, Soft & Wet is a humanoid close-mid ranged Stand.

It possesses enhanced strength and is also capable of extremely rapid hand-to-hand combat. However, its main ability includes the power to create bubbles with different effects, such as the ability to steal the friction of an opponent.

This stand is a part of the Arrow Stand Pool, in which it has a 4% chance (A-Tier percentage) of obtaining from a Stand Arrow.

Soft & Wet is a humanoid Stand of a streamlined, robotic form, and light in color. On the top of its head is a five-pointed star bound with a circle. Horns roughly two-thirds the width of its head grow from the region of the ears, shaped as tapering pentagrammic prisms. It has round eyes, shaped as slotted screw heads; vertically dividing very small, slight, round pupils. Its face has a thick gap running from the top of the forehead past the bottom of the chin. Initially, Soft & Wet had large holes in the sides of its face, and shorter, lined "horns".

The front of two broad plates covering its torso is cut like its face in the shape of a large anchor; as well as in a line beneath both arms and between the base of its back and shoulders. Its feet and hands are covered with plating, as are the sides of its hips and shoulders, both of which are shaped like sharp hearts and bear a five-pointed star.

It has fine arms and legs, with dark, exposed ball-and-socket joints supported by short exterior cables. Its pelvis is bare and mechanical. The gaps in its plating reveal a deeper surface, covered in a fine pattern of horizontal ridges. An internal structure is visible at its profile, showing blocks approximating human centers of mass.

Soft and Wet sends out a star-embedded bubble that on contact, makes the opponent bouncy.

Soft and Wet, a close-medium range stand has a good amount of durability and a wide moveset. It can be used in a stealth ambush or a hand to hand 1v1. Your Z is something that can be good to use for speed or an escape. For example, Z to R or Z to E can make an easy hit, but with a long cool down. If you hit your F, that's an easy win. However, do notice that while your opponents are encased, you cannot hit them with your rush because they will miss completely. Your E and R are pretty strong if you want to escape safely; blocking fast while on the Softcopter.

Soft and Wet has malleable uses in combat, you can easily be defensive and offensive in a battle at the same time using Z to gaining speed and H to cover the area while your other moves stay in cooldown. If you have enough mastery, you can win fights with a good amount of health left, like 78% or 98%. It's meant to wait for opponent actions like heavy punches or barrages just to counter it. Good aim is somewhat important for this stand. (Projectiles are slow and its more effectively used at a close-medium range.) If you’re bad at aiming, try playing a gun game. And yes, you can do Z - F. You can use it for combos, or use H to trip them and use F. T can be good for running away or an easy attack. Y can be good for an easy hit like it says. X is a very useful counterattack, as the X move has an over heaven block capacity, you can use X to make your foe's E or R move useless, then use your own attacks on them. The F move itself deals 50-74 damage, so if your R is still in cooldown, the F move can still kill most stands that have red health in a 1v1.

Someone being blinded by Soft & Wet's bubble.

Soft and Wet using The Softcopter.
Add a photo to this gallery 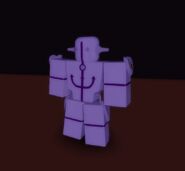 Soft and Wet's Old Model.
Add a photo to this gallery 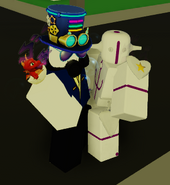 Soft and Wet and the user menancingly posing.
Add a photo to this gallery

Retrieved from "https://a-bizarre-day-roblox.fandom.com/wiki/Soft_And_Wet?oldid=432478"
Community content is available under CC-BY-SA unless otherwise noted.