A Bizarre Day (Roblox) Wiki
Register
Don't have an account?
Sign In
Advertisement
in: Locations, Reworked, New Map,
and 2 more

"I'm the kind of guy who keeps a grudge if someone screws with me." - Jotaro Kujo (Kūjō Jōtarō, 空条 承太郎)

Corner of the Map

A soccer ball
The Soccer Field is a place where you can fight people. It's located at the corner of the New Map, with a bridge connecting it to the small park.

The Soccer Field has a circle in the middle as well as a line dividing the arena in 2, It has 2 half circles in the left and right of the Arena. On it, there are 4 benches and 2 rubbish bins. This place was where Funny Valentine used to spawn.

There's a giant gap on the dirt wall, at the right of the soccer field that leads you to the Joestar Mansion.

The Soccer Field is used in tournaments held in VIP Servers. People intend to fight in the arena, most of the time with host-given rules. Even as the name suggests, this Arena can also be used for FFA (Free for All) or Team-based matches. They can be good for not confusing people with a 1v1 so they won't interfere.

The tournaments are basically fights for fun in a tournament style. The tournaments work like this: The players that join the tournament must be on the rails and stay there. The Host or the VIP Server Owner will decide who will fight, the player that wins gets to fight with other winners until there's one final battle.

The old "Basketball Court" when the Map Update was out.

Basketball Court in the Easter Event (2020)

1v1 Arena before the addition of the soccer ball. 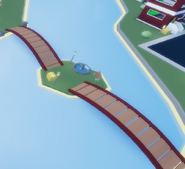 The bridge that connects the soccer field with the main part.

Thermometer located in one of the corners of the Soccer Field.

Soccer Field during the Halloween event.
Community content is available under CC-BY-SA unless otherwise noted.
Advertisement