"I'm gonna turn you into a pincushion!!... As for the rest, I'll leave that to the Devil himself." - Jean Pierre Polnareff (Jan Piēru Porunarefu, ジャン・ピエール・ポルナレフ)

Silver Chariot is a powerful, close-range Stand that primarily fights with the rapier it is equipped with. Along with the Stand's mechanic to stun its opponent with most of its Movesets, this Stand can be very deadly in close-range combat.

This Stand is a part of the Arrow Stand Pool, in which it has a 1.4% chance (B-Tier percentage) of obtaining from a Stand Arrow. By using a Requiem Arrow on Silver Chariot, the user will be able to obtain the requiem variant of this Stand: Chariot Requiem. Silver Chariot can also be obtained with the Bizarre Arrow with a random chance of getting it.

In appearance, Silver Chariot takes the appearance of a robotic humanoid person, the lower half of its torso is thin, while the rest of its body is covered in silver-colored armor, topping it of with a silver rapier in its right hand.

Despite its thin appearance, Silver Chariot is covered in heavy armor, with a helmet worn on its head, and other armor pieces worn on its legs and arms, similar to a medieval knight.

Silver Chariot is often portrayed as being covered in polished silvery armor, befitting its name. 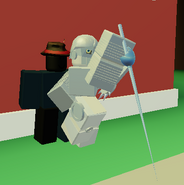 Silver Chariot using "This arrow... What is it doing to Chariot?!"
Add a photo to this gallery

Silver Chariot using Leg Sweep without its armor.
Add a photo to this gallery

Silver Chariot as seen in the anime 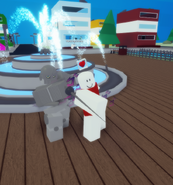 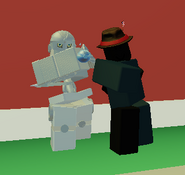 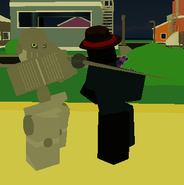 Silver Chariot posing without its armor.
Add a photo to this gallery
Retrieved from "https://a-bizarre-day-roblox.fandom.com/wiki/Silver_Chariot?oldid=626638"
Community content is available under CC-BY-SA unless otherwise noted.