The Shiny Sword is the shiny variant of the Classic Sword. It has better damage than the Classic Sword, however, it is less common to see because only the classic sword will work for the Samurai Quest. Also because of the big price tag.

Despite shiny variants not doing more damage than the other in the sense of stands, this is an exception.

Shiny Sword is a melee type spec that resembles a sword, as the name implies.

It has a huge dark blade with a small handle, with a hole on the blade's bottom. The sword possesses no guard whatsoever.

It also has a red glowing aura around it. This spec does not have any voice lines. When you unequip the shiny sword, it looks like a Dark Heart. It looks like Gut's Dragon Slayer from the series Berserk and the dark souls sword. 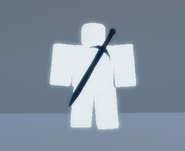 Shiny Sword on The Back of a Player. 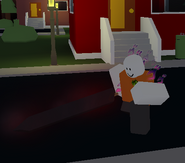 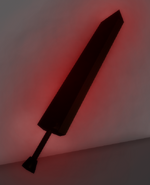 Shiny Sword's old model.
Add a photo to this gallery
Retrieved from "https://a-bizarre-day-roblox.fandom.com/wiki/Shiny_Sword?oldid=427965"
Community content is available under CC-BY-SA unless otherwise noted.