A Bizarre Day (Roblox) Wiki
Register
Don't have an account?
Sign In
Advertisement
in: Stands, Non-Canon Stands, Semi-Canonical,
and 17 more

75% of damage
Shadow The World, often shortened and commonly referred to as STW, is the non-canonical Stand used by Shadow DIO, a secret playable character featured in the game JoJo's Bizarre Adventure: Heritage For The Future. This Stand also has a shiny variant of itself: Retro Shadow The World.

This Stand is obtainable through using a Camera on Vampiric The World. Upon using the camera, the Stand has a 20% chance to turn into Retro Shadow The World.

Shadow The World has a golden, almost yellowish outline, and a humanoid build, however, there is only half of Shadow The World's actual body for its model. Its appearance is based on the silhouette of The World; however, instead of being black and opaque, like shadows generally are, it is transparent and has a golden outline. It wears a headpiece covering its face to below the place of its nose, slanting at a steep angle from the base of its forehead to a peak situated above the rear of its head by about half its height, leaving the face of an inverted triangle visible to the front; somewhat similar to the Red Crown of Egypt.

Much of its lower body has faded away/has the effect of fading away, like a hologram, similar to that in Heritage For The Future. This Stand has also gone through many color changes, starting with black, then yellow, then black again, then a gradient from light blue to pink, and finally to yellow again.

As for its Shiny version, Retro Shadow The World's color scheme is made out of a gradient with pale purple and white colors. It shines and is more similar to a ghost instead of a silhouette. The inspiration for this Shiny comes from Jojo's Bizarre Adventure: Heritage for the Future.

Shadow The World is known for having many moves which when many of them combined, can make great combos. STW is a rare Stand, along with TA4 and many others. After being nerfed, STW is losing value. STW is still a very powerful Stand for 1v1s and tournaments, if you use it correctly. Since STW has many moves, there are many combos you can make by yourself. STW's block isn't as effective as other Stands, but it is useful when you are being barraged or when you can't dodge an attack. Shadow The World has a counter move (Stand Mode On: H) that can be used in 1v1s (note that OHs' T move and GERs can bypass it). STW used to have a very low durability, but it has received a health buff along with all other Stands, as a way to make up for removing the regeneration passive. Using B can cancel barrages, so this is helpful against TA4s and GERs.

Teleport is very useful, It may have short range but you can use it to escape from the opponent. However, since an update, STW received a balance and is unable to attack instantaneously when teleporting. It may not seem like much. One way to avoid the "time stop stun" is to use a move before you teleport (e.g. Shadow Uppercut) which allows you to exploit the hitbox of a move so that when you teleport, the hitbox follows you, thus allowing you to hit the opponent. When you do this the "time stop stun" will be broken allowing you to do a move even though you already teleported.

You cannot move during your Q or T. So try to use them from far distances. The Q and T move won't damage the opponent if he is 1 stud or nearer from you. You can steal other people's time stops. This is not likely an intended feature. It can be performed by time-stopping before someone else begins their windup to stop time. This only works because of ping. It's hard to explain, but this is the best way to put it; the game has a mechanic where nobody can stop time after someone else has stopped time for a short period. This period immediately starts when a time stop windup begins. Once someone's time stop is stolen, they cannot move in it and you can spam all your knives, lasers, etc. Every time stop can be stolen except another Shadow The World's. This is a glitch similar to the old one, before Global Time Stop Cooldown was added.

You have the advantage here, since TW:OH is almost the exact same as SP:OH. TW:OH has lots of health due to its durability being S making it very tanky, use your projectiles to zone out the TW:OH and try to avoid going into close range combat. The only thing you should watch out for is TW:OH knives as they do a lot of damage especially if the enemy is at low health. Also watch out for TW:OH H move since it is a ranged attack and deals quite a bit of damage.

You have a huge advantage here, your speed will completely outclass SP:OH. However, SP:OH is tanky and also a heavy hitter, so try and not to engage in close combat too much. Chip damage is HIGHLY recommended, so SRSE (Space Ripper Stingy Eyes) and Double Knife Volley excel here. If you TS and then use knives (better for dealing with a SP:OH), you can take a lot of its health.

Very even match up, Kars wins at the health and damage department, while you win at the movement and range department. Kars is a very close ranged spec with only 1 projectile that is very hard to hit, try and zone the Kars out with projectiles and try to not get too close as they will shred you with their barrage. Because Kars only has one projectile move, they usually falls in Shadow The World's counter move. Again, try not to engage in close quarters/combat too much.

Pretty much the same as Kars, However Samurai does have the advantage of being slightly faster than you. Most Samurais run and hit players so when a Samurai gets too close try to use the F move STAND OFF which allows you to ragdoll the Samurai and use combos. When the samurai is running, try to gain distance and use your ranged moves, however, this can be punished because Samurai has One ranged move very similar to Kars' ranged move. When the Samurai does the dash move (F move for Samurai) try to Dodge (C key) or dash (V key) in order to dodge it. Try to use the dash/teleport and counters frequently and also try to hide in obstacles in order to cut sight from the Samurai seeing your time stop pose.

Due to STW having an allergy to Hamon, you can easily punish them if you land their moves, you are out-matched by movement though. You can be punished very easily if you can't land your moves or have bad timing. Do not use Hamon's barrage, STW can easily escape your barrage, you are also slow when you barrage, letting the STW to counter you. Try to land your sword as much as possible, because the vampiric passive "Undead Prey" and "Hamon Allergy" can take away 50-80% of STW's health if the sword hits. If used correctly, you can defeat a STW very quickly.

As a STW, Joseph Hamon pretty much counters you in every single way. It is able to damage you from range, mess up combos, and can slightly out-speed you. Not only that, it can do extra damage due to you having a Hamon allergy. If you're at a range, do not attempt to stand still. The JH user will likely attempt to use either the Thompson or Clacker Volleys. If they attempt to use the Thompson, try to move in close so that you can get a combo in, as they cannot move while using it (however they can easily cancel the Thompson it and use their Z move). If you're close to them, watch out for their Stomach Punch and Rope Trick, as these will easily screw you over. Lastly, try to use combos that knock down the opponent a lot, as they can easily use the Hermit Purple Block if they get back up. If they do try to use the Hermit Purple Block, use either Double Knife Volley or Space Ripper Stingy Eyes, as all projectiles bypass through the Hermit Purple.

Shadow The World's HP during its Draining Grab Ability.

Shadow The World using "Are you really trying to shoot me? / "The Scale of Horror". 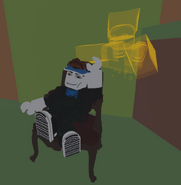 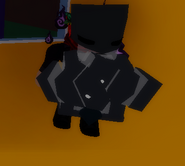 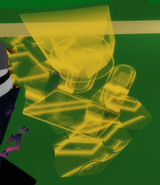 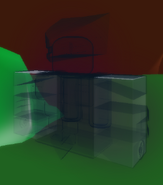 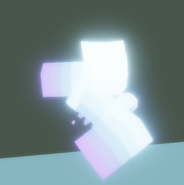 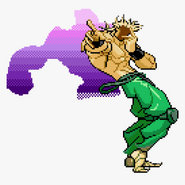 DIO with Shadow The World in JoJo's Bizarre Adventure: Heritage For The Future.

Shadow The World as of how he actually looks in Heritage For The Future. (And where the color palette on the fourth model is based on)

Shadow Dio's pose in Heritage For The Future. 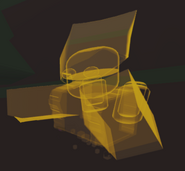