Below a manhole near Peaceful Park

Dio Brando
Vampiric Minions
The Sewers was an area that was first added in update 1.9.7. Originally, It replaced the E-Shop place near the edge of the map.

This was reworked in the 2.0.1 version, the map update. Finally, it received another rework in v2.0.2.

The Sewers have many different sides and corners, with different designs of graffiti (shown in the gallery below) on the walls of the sewers.

After the 2020 Halloween update, the sewers are now much larger. There are now 3 entrances to the sewers. If you search around the sewers you will find a red door. Inside is an empty room, if you walk in, you will fall to a pit and die.

There is Dio Brando that spawns every 10 seconds and can either drop:

There are also Vampiric Minions that spawns near Dio Brando. The Minions can either drop:

There is also a chance that a Stronger Vampiric Minion will spawn. When killed, it drops 2 items instead of one.

After the 6/17 Invasion of the Void Walkers, a pair of gleaming red eyes appeared behind the darkness of a sewer grate. Its motives are currently unknown.

After the 17/07 update, the glowing eyes and the cutscene have been removed and there is a door with a code now, the code being 12132019 that unlocks it and presents a room with a message saying welcome to Tim's Juice and an empty room.

In the 9/10/2020 (MM/DD/YYYY) update, the sewers and Dio Brando's spawn was much larger. There's a lot of rusty barrels and iron bars lying across the sewers. Some of the lights are now flashing constantly instead of appearing bright all the time like the old updates. The graffiti and the secret room are still there.

In the secret room, there is a vent that leads to a bigger room that resembles a train station, inside the train station there are vending machines, benches, and occasionally a train will pass by.

A view of the new sewers 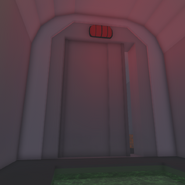 The inside of the red door.
Add a photo to this gallery

Closer View of the Vamp Mask and The Pot.

Dio Brando and Vampiric minions in the new sewer. 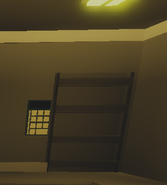 Closer view of the door in the sewers. 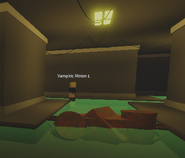 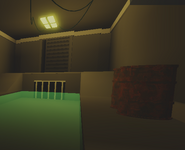 Entrace of the sewers.

The name of the removed stand One More Time.

Graffiti.
Add a photo to this gallery
Retrieved from "https://a-bizarre-day-roblox.fandom.com/wiki/Sewers?oldid=629391"
Community content is available under CC-BY-SA unless otherwise noted.