Tim's Juice Worker (Formerly)
The Secret Sewer Room is a hidden location found behind a waterfall in the Sewers. The room is accessed via a locked door with a passcode. When the correct code is entered, the door unlocks and opens itself.

The locked door has 4 bars arranged horizontally in front of it, preventing entrance. Above the door is a bright green light that slightly illuminates the corridor. To the left of the door is a small keypad that can open the door. When opened, the door's bars individually move to the right and the door moves into the right wall in an identical fashion.

The keypad is a telephone-styled pad with numbers ranging from 0 to 9. The large button on the bottom functions as the enter key. On the left side of the keypad is a light that turns green or red if the code entered is correct or incorrect, respectively.

Behind the door is an upward slope leading to the right. At the top of the slope is the door leading to Tim's Juice Shop.

Tim's Juice, stylized as Ti☰'s J�I?☰, is a sub-Location located in the same area; this location seems to be a bar. Tim's Juice Worker used to work here. There are shelves and tables with chairs. This is a reference to Tom's Juice, a location removed from one of the previous maps.

Behind the counter is a red button that opens the sword case in A Bizarre Dojo.

The corridor outside the room. 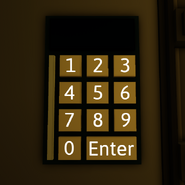 Picture of the keypad and a more descriptive look of the keys.

The path that leads into Tim's Juice.

Wide shot of the bar.

The red button behind the counter. 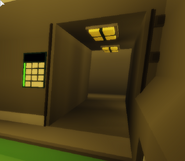 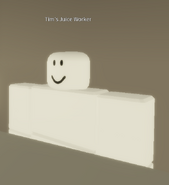 Tim's Juice Worker behind the bar.
Community content is available under CC-BY-SA unless otherwise noted.
Advertisement