A Bizarre Day (Roblox) Wiki
Register
Don't have an account?
Sign In
Advertisement
in: Specs, Non-Stand, Non-Canon Specs,
and 5 more

"I don't care how many more of my comrades bite the dust. I'll just kill that many more to make up for it." - Samurai (Bushi, 武士)

265 HP
Samurai is a non-canon, close-ranged Spec which can be obtained by completing the quest given by the Samurai Teacher NPC.

A distinguished property of this Spec is the unmatched speed boost and a great amount of destruction it provides for the user, as well as a unique run animation to go with it, making it one of the fastest and most powerful specs in the game.

The Samurai spec takes the shape of a simplistic Japanese sword (most likely a Ninjatō or a Chokutō), characterized by a straight, single-edged blade with a circular or squared guard and long grip to accommodate for two hands.

It has gold and black designs on the guard, a sharp blade, and black and white designs on the handle. When the ability "Senses Enhancement" is used, the blade of the user will glow a bright white color, with pink pedals flowing behind the sword.

It is important to note that it is not a katana, due to the fact that the blade and scabbard in-game are straight. In contrast, katanas have curved blades.

When fighting against a Samurai User, it is extremely important to keep your distance. Samurai users are extremely short range, It's only ranged move is E (Blossom Breaker). Stands with lots of mobility options like Made in Heaven and C-Moon will destroy this spec easily. F (Petal Cleave) does a lot of damage, however it can be easily dodgable if you time your roll with the Petal Cleave. Keeping away won't be effective as Samurai's can close the gap very quickly and can go in and out faster than most stands.

Samurai users are extremely vulnerable when their T (Senses Enhancement) runs out. For most of the time, Samurai users will try to run until their T is ready to be used again. Make sure to deal as much damage as you can when they have their T off. But don't expect this to be an easy task as Samurai's can easily evade your attacks using their dash and just jumping. 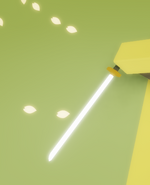 The Samurai's petal trail during its Sense Enhancement ability. 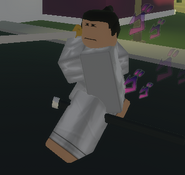