Retro The World (Over Heaven)

Retro The World (Over Heaven) bears the appearance of a tall, heavily muscular humanoid - bearing a strong resemblance to DIO himself in terms of build and clothing. It wears a headpiece covering its face to below the place of its nose, slanting at a steep angle from the base of its forehead to a peak situated above the rear of its head by about half its height, leaving the face of an inverted triangle visible to the front; somewhat similar to the Red Crown of Lower Egypt.

It has a glowing greenish color similar to Toxic Experience, which has been removed. Recently, Retro The World Over Heaven has been remodeled.

RTWOH is a great stand for 1v1ing. It has both far ranged and close-ranged attacks, making this a good choice for any opponent. H is average but able to stun opponents and you can combo from then by then. Fights will be made even easier with the long duration of the time-stop combined with its high damage moves.

While in a fight you normally want to use R for most of the battle, as it deals good damage with a quite big knockback and ragdoll. E is not very good against a fast/very mobile opponent like Kars, MiH, and Samurai because they will just go out of the range, but you can use it when absolutely any spec/stand is close to you as the Heavenly Muda Barrage gives you a LOT more of durability along with a -50% knockback effect from other stands, you can not be ragdolled while barraging and if your opponent dares to get closer and try to hit you, your Heavenly Muda Barrage will slow them if your punches/kicks reach them, dealing massive damage, this move is deadly if you use it as its supposed to be used. T is good if you can land it. Normally, opponents would do a Stand Jump, evading your Reality Overwrite, this move is recommended to use when the enemy is close and stunned by you, or while in Timestop. Using B+Y which is the self-heal will give you a great advantage in combat. Always use it when you have 75% of your HP. No exceptions. V is one of the best knives in the game. It does pretty good damage that goes even higher when you lose health. It is also pretty fast and if you have good aim, you can kill opponents from far away by using this. Other Players may call you "a bad player or a noob" for using time-stop, my personal recommendation is to use it when you can, as you can literally kill anyone in this period of time. Don't use it on clean PvPs tho, as it is an unfair move for the opponent. This stand is a great one overall, you are deadly in close combat and powerful at long distance. It's one of the best PvP stands in-game. A very useful strategy/combo is while in time-stop, spam V, throwing reality-warping knives which will deal TONS of damage if they all hit (180 with full HP, even more at low HP). Using this stand really requires timing and being patient, waiting for the perfect time to land your attacks to deal massive damage to the opponent.The passive allows you to play more defensively when at low hp allowing you to spam knifes and is a great stand if you can drag your battles so T and V become very useful if you can stall.If you can try to keep your self at orange or yellow health to A) Have a decent time stop B) A decent barrage C) Good knifes.

If you’re new at RTWOH, use this as a guide: (Please hit "expand" to see a list of combos.)

The user using Reality Warping Blades/ Knifes.
Add a photo to this gallery 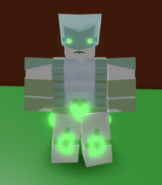 Old model of RTWOH.
Add a photo to this gallery
Retrieved from "https://a-bizarre-day-roblox.fandom.com/wiki/Retro_The_World_(Over_Heaven)?oldid=427945"
Community content is available under CC-BY-SA unless otherwise noted.