"The true nature of 'The World's power far beyond your meager understanding!" - DIO Part 3 (DIO, ディオ)

Retro The World is a humanoid stand and has a tall and very muscular build. It bears a striking resemblance to DIO in terms of clothing and its muscular build.

It wears a headpiece covering its lips to below the place of its nose, slanting at a steep angle from the base of its forehead to a peak situated above the rear of its head by about half its height, leaving the face of an inverted triangle visible to the front; somewhat similar to the Red Crown of Egypt. The back of its hands bears the shape of a clock with similar emblems on both its shoulders and hips. Its chin and belt region are decorated with hearts, while its knees are capped with heart-shaped pads.

The main color scheme of Retro The World is Pear color, gray and golden. Golden is for the hearts placed around on the Stand. On its back are twin diving cylinders, connected via short twin ridged cables to the rear of its mask; perhaps secured by thick, ridged, or puffed straps running from the rear of its waist over both its shoulders to its front. This color palette was also shown in the 1993 Stardust Crusaders OVA.

TWGH, also known as The World Greatest High (Vampire mask can be obtained by defeating DIO or defeating Dio Brando boss, or digging one with a Trowel).

Retro The World using Timestop.
Add a photo to this gallery

The World in the OVA. 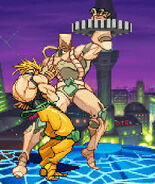 The World in Heritage for the Future. 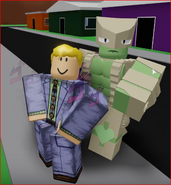 Old RTW pose and model.
Add a photo to this gallery

Retro The World's pose.
Add a photo to this gallery
Retrieved from "https://a-bizarre-day-roblox.fandom.com/wiki/Retro_The_World?oldid=432462"
Community content is available under CC-BY-SA unless otherwise noted.