This stand, just like its original counterpart Star Platinum: Over Heaven, the way to achieve this stand was by using DIO's diary on Retro Star Platinum.

Retro Star Platinum (Over Heaven) is a humanoid type stand. Its skin is often a hue between dark grey, black and red. Its face and body have varying colors. It has long, flowing hair with a darker shade above its eyes and on the bridge of its nose, blurring the distinction between its hair and head.

His secondary color is the neon orange, representing fire. These parts match the base colors of Retro Star Platinum Over Heaven.

The spaces under its eyes and on its cheeks and chin are a darker color and divided clearly from the space around its nose and mouth. It wears a cap on its chin, and a metallic headband in three pieces, the central piece of which is shaped as a vertical ellipse. Initially, its facial features were very similar to Jotaro's.

Retro Star Platinum Over Heaven charges its right arm for a second, then casts a large, glowing projectile at the enemy. This projectile deals percentage damage, meaning it deals damage with a multiplier based on the maximum health of the target. Against the lowest health pool (100 HP max), it dealt an incredible amount of damage, especially on DIO.

The Universe-Warping Star Blast was replaced with Shield Sphere.

The user creates a shield-bubble protecting everyone who is inside, except the user itself, if you stop time inside the bubble, the move won't work.

The Shield Sphere was replaced with Yare Yare Daze...

Retro Star Platinum: Over Heaven (known as RSPOH for short) is in general, an extremely powerful stand. It dishes out very mighty attacks and is rather dangerous to encounter. Over Heaven grants an extremely significant power boost to Retro Star Platinum. It boasts one of the fastest and highest-damaging attacks rushes in the game, as well as the ability to restore the user's hp with ease. With it, you'll want to beat down your opponent before they even get a chance of running away. What you lack is both range and speed, so you’ll have to use mainly brute force and melee combat. Up against stands like Emperor, Hierophant Green, or Soft and Wet, it’s gonna be really hard to hit them. 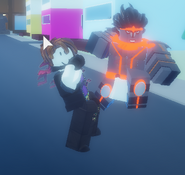 RSPOH's normal pose.
Add a photo to this gallery

"Your judge will be my stand."

"You ticked me off."

Retrieved from "https://a-bizarre-day-roblox.fandom.com/wiki/Retro_Star_Platinum_(Over_Heaven)?oldid=431802"
Community content is available under CC-BY-SA unless otherwise noted.