Pierce your stand with this arrow to grant it a significant boost in power.

Spawning around the map every 37.5 minutes with a 1/4 chance

N/A
Requiem Arrows are unique forms of regular Stand Arrows, which gives the ability of Requiem to the player who finds it and uses it on themselves.

A Requiem Arrow looks similar to a regular arrow, but its handle is snapped off. (shorter than a normal arrow)

It has a beetle design on the center of the arrow itself, which has a small gem within it and another gem on the opposite side, without the beetle.

Requiem Arrow being seen from the front.

Requiem arrow held by a player.

Requiem Arrow and a Stand Arrow. 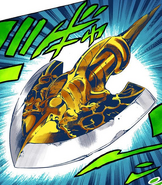 Requiem Arrow as seen in the Manga.
Community content is available under CC-BY-SA unless otherwise noted.
Advertisement