50% of damage
Purple Haze is the Stand of Pannacotta Fugo, an ally featured in JoJo's Bizarre Adventure: Vento Aureo. Purple Haze is an unstable Stand that contains a particularly deadly, flesh-eating virus capsules in its hands.

Because of its deadly ability and its potential for indiscriminate destruction, it is undeniably a powerful close-range Stand. This stand also has a shiny, Purple Haze (Black and White).

This stand is a part of the Arrow Stand Pool, in which it has a ~0.7% chance (A-Tier percentage) of obtaining from a Stand Arrow. To obtain the shiny version of this Stand, you need to use a Monochromatic Sphere on the regular version.

Purple Haze is a humanoid Stand of height and builds of an average person. Its face and body are patterned by horizontal lozenges of alternating shade, and armor pieces are present on its shoulders, elbows, and knees. It has spikes along its back, and red pinpoint eyes.

The Stand has a long, flowing cape, surrounded by a purple mist. Its lips and appendages are loosely stitched, and its eyes have distinct irises with miotic pupils. Befitting its name, all media featuring Purple Haze portray it as a purple and white Stand, with a checkerboard pattern of a purple and white color scheme covering its torso and legs.

If the user is in rage mode, they will regenerate a capsule if they have less than 6, it will only regenerate one. The user can't regenerate their capsules again until they are in rage mode again. 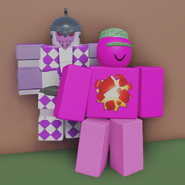 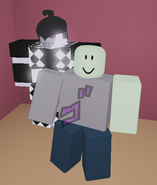