"We here at ABD pray that you will find a path to heaven when encountering Guest with this Stand, for you won't survive." -ABD Staff referencing Pot Platinum (Potto Purachina, ポットプラチナ )

100% of damage
Pot Platinum is a non-canon admin Stand belonging to the Founder of ABD, TheGuestToBlame.

Due to it being an admin Stand, this Stand is unobtainable, and is only assumed to be accessible by the founder himself along with other ABD staff members, such as admins and developers.

Pot Platinum's colors consists of mainly blue and white. It wears a pot on its head, with blue glowing eyes. On the side of its arms is a clock. It has shoulder pads. Its shoulder pads also have a neon blue swirling design. 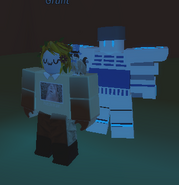