A Bizarre Day (Roblox) Wiki
Register
Don't have an account?
Sign In
Advertisement
in: Stands, Shiny, Unobtainable,
and 6 more

This Stand used to be obtained by using a Stand Arrow with a 0.1% chance of obtaining it. The Stand then became so only admins could use it.

Pink Crimson is a humanoid Stand of a height and build similar to the user, but tends to look much bigger and taller. Its body is covered by a raised diagonal grid; save for its face, neck, shoulder guards, elbows, hands, abdomen, crotch, knees, and feet/footwear.

The aforementioned second face on Pink Crimson's forehead known as Epitaph  is sometimes duplicated in the same position on the user's forehead. Epitaph presents itself as a bump on the forehead featuring eyes and a mouth constantly grinding its teeth, often mimicking Pink Crimson's current mood.

Befitting its name, Pink Crimson is depicted in as being primarily red, with the shade of pink varying from its chest to its leg. Epitaph is also seen with a pink color scheme, while Pink Crimson's face has a shade of yellow surrounding its facial areas and its head. There are also stripes of yellow covering its parts of its body, similar to a checkerboard pattern. 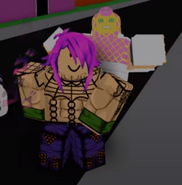