"Show me how you want it to be. Tell me, baby, 'cause I need to know now" - One More Time Lyrics

50% of damage automatically
One More Time is a suit-type Stand, with it being worn by the user when they obtain this stand.

One More Time is seen as a tanky stand, with its passive automatically halving any damage it takes. Despite the fact that it only deals a semi-decent amount of damage, its passive is the main focus of this stand.

To obtain OMT first you need a D4C to go to the D4C's Dimension. Once you are there, stare at the nostalgic pictures and One More Time will automatically be added to your list of shinies with a 0.08% chance of obtaining.

One More Time's appearance is pretty straightforward and also simple, an orange jacket with green stripes on it, along with a dot in the center and a hat bearing resemblance to a straw hat.

Its appearance is based on Tom from Tom and Jerry, who was wearing the same outfit in an episode of the show.

As a jacket type stand, the suit morphs into the user's avatar, meaning that it will override all of the user's cosmetics, regardless of their model.

The user will perform a fast barrage that has the speed of a Star Platinum or The World punch barrage. It does 5 Damage each hit and plays the Tom & Jerry theme song.

If you are new to OMT, use this as a guide. 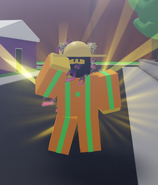 Origin of OMT.
Community content is available under CC-BY-SA unless otherwise noted.
Advertisement