Evolves a stand/Changes a Stand's appearance

Acquired from digging with a trowel at a 0.375% chance

N/A (acquired via Trowel)
Monochromatic Sphere is a rare Item that can be obtained from a Trowel.

The Monochromatic Sphere is a glowing black and white sphere that bears resemblance to a black hole. It has a glowing white ring emanating from its center. 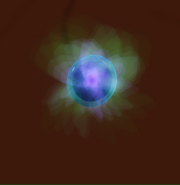 2 Ender Pearls got stuck by 2 arrows.
Add a photo to this gallery
Retrieved from "https://a-bizarre-day-roblox.fandom.com/wiki/Monochromatic_Sphere?oldid=628646"
Community content is available under CC-BY-SA unless otherwise noted.