"Don't try to kill him, I know it's silly, but this Dummy is immortal..." - Player looking at the Menacing Dummy (Ikaku suru yōna damī, 威嚇するようなダミー)

Black
The Menacing Dummy is the main training or damage taking dummy that currently exists as an NPC in the game.

The Menacing Dummies can be found in Peaceful Park, A Bizarre Park, and in front of the Joestar Mansion.

For the Halloween Event, the Dummies have dressed up as various different spooky figures. The only exceptions are the Sentient Menacing Dummy and the Self-Aware Dummy. They were foreshadowed by the Pumpkin Dummy who hid in the Sewers a few weeks before the event started.

The Menacing Dummy dons a Tin Pot and has a permanent cold stare. It has white skin, jet-black trousers, and a coal-like shade of black for its torso.

Emanating from the center of it are several menacing (ゴゴゴゴ) particles, identical to the particles used for when a player poses with their stand/spec.

The old model of the dummy.

A closer look at the Menacing Dummy. 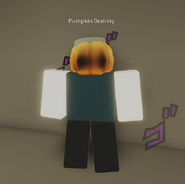 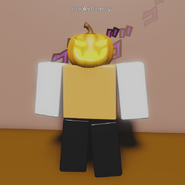 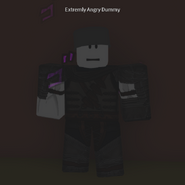 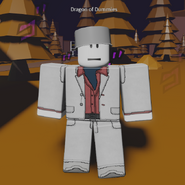 The Dragon of Dummies. 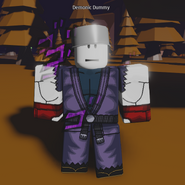 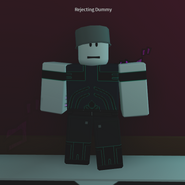 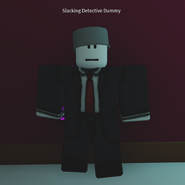