It's a powerful Stand with the ability to produce and manipulate fire in various ways. Magicians Red's signature ability is to freely generate and control fire.

This stand is a part of the Arrow Stand Pool, in which it has a 1.4% chance (B-Tier percentage) of obtaining from a Stand Arrow.

Magician's Red appears as a humanoid stand, with the difference being that its head has more of an appearance to the likes of a bird, more specifically a phoenix.

The Stand is seen having yellow feet (similar to many types of birds), with fur covering its entire body except for its chest and back. Magician's Red focuses on the color schemes of red, orange, and yellow, befitting its name.

Magician's Red has one of the lowest durabilities in the game and it is imperative to the playstyle to avoid fighting opponents that are close-ranged. Magician's Red struggles a against stands that are also long-range because of the lack of health and spammable projectiles. It has a few close-ranged options but not many. It is completely reliant of Red Bind for close-ranged combat. 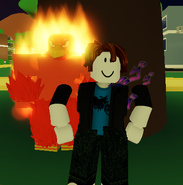 Magician's Red and the user menacingly doing the old pose. 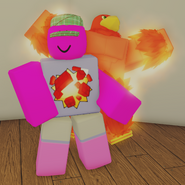 An old teaser for Magician's Red.

Magician's Red as seen in the anime.
Community content is available under CC-BY-SA unless otherwise noted.
Advertisement