Made in Heaven is the stand of Enrico Pucci, the main antagonist of JoJo's Bizarre Adventure: Stone Ocean. This stand is the end result of the chain of heavenly evolutions from Enrico Pucci's previous stands; Whitesnake and C-Moon, which is how Made in Heaven are achieved in-game.

As an extremely fast stand, Made in Heaven consists of chops and slashes in its moveset. Combine it with the ability to accelerate its speed, this stand can be extremely deadly when utilized/used correctly . This stand also has a shiny counterpart of itself: Made On Hallow's Eve. However, this shiny is currently unobtainable.

Made in Heaven takes the appearance of a half man half horse (Centaur),While the top half resembles that of a man, the bottom half resembles that of a horse. Its arm is covered in neon circles. A huge cable, forming a loose arch, joins the humanoid 1/2 of among its shoulder blades to the truncated posterior of the horse. For some reason, MiH's neon circles don't glow in some occasions, presumably glitches.

The horse wears blinders and reins, held by the hands of the humanoid 1/2 of, which wears a collar of lengthy feathers, and a protracted vine wound around its crown. Its head is barely elongated, presented with a huge clock above its eyes and nose. It has huge speedometers additionally embedded in its frame on the facet of the joint of the horse's legs and the horse's forehead.

As for its shiny, Made on Hallows Eve, there are several differences in its appearance. The main difference being that this shiny is based on "The Headless Horseman", an infamous Halloween monster with a skeletal body and a pumpkin as the head. The stand also features a horse model with four legs instead of two, having an overall black color scheme, with glowing lights on its pumpkin head, with the horse having glowing blue eyes, unlike it’s non-shiny, which has red eyes.

3 punch combo from the stand user. This move has a high chance of critical hitting, dealing 34 damage instead, which is like a heavy punch and can be used without showing your stand. This was replaced with Backhand Slash.

Made in Heaven accelerates both itself and the user at such a speed that they seemingly teleport behind the player your cursor is pointing at. (No damage).

Made in Heaven speeds up time, allowing the player to move much faster, it can disable time stops, make player walk speed slower (No damage increasing).

Made in Heaven resets the universe, buffing itself up by halving move cooldowns. Any moves on cooldown as Universe Reset is activated will instantly be freed

Made in Heaven is one of the most powerful stands in-game for a different reason than other abilities. Whereas most stands or specs have immense strength or hard-to-counter abilities, Made in Heaven's true power comes from its unrivalled speed. Its speed allows its users to zoom around without getting hit, and at the same time doing damage to the opponent with little to no cooldown in later stages of Time Acceleration. Its speed is shown as infinite in the wiki, showing that its speed is unrivalled. A good way to counter Made In Heaven is to lure the user into houses, buildings, and anything that has 4 walls and a roof. Usually, the only way they would survive getting lured in is by teleporting out or managing to reach the exit before dying.

E and R are Made in Heaven's go-to abilities. Both moves are close-ranged and E can ragdoll the opponent for a good amount of time, along with having moderately-low cooldowns. T is Made in Heaven's long-ranged ability with a short cooldown, but it doesn't travel as far or as fast as most people think. An experienced player can easily move out of the way. F is Made in Heaven's hard-hitting and hard-to-miss move, which also ragdolls your opponent further and lays the ground for more attacks, but it has a long cooldown. B is Made in Heaven's counter, but you should be careful when using this because it doesn't affect Requiem or long-ranged attacks, which can leave you vulnerable. You should use this move when you're certain your opponent's next attack will hit you.

Otherwise, it's a waste. Y is used to teleport and attack opponents that are close to you, but not close enough to attack with a close-range attack. Finally, Made in Heaven's H move, Time Acceleration, is definitely one of the best abilities in-game. Not only does it buff your speed tremendously, but it also gives you passive health regeneration. Experienced Made in Heaven users are absolute pros when using this, as they are practically untouchable. However, newer users will find it a tad difficult to land attacks with such insane speed. Make sure you know your opponent is in range of your next attack before striking.

Made in Heaven's Z Move (Light-Speed Dash) is a Top Tier Z Move, due to it being able to cover a lot of ground compared to other Z moves, especially the common Stand Jump. Remember that Time Acceleration not only increases the user's speed but also decreases the cooldown of attacks allowing for the user to stunlock their opponent to death with E and R at later stages of time acceleration.

Made on Hallows Eve:

Made In Heaven using Severing Chop.

Made In Heaven using Throat Slice.

Made In Heaven using Light-Speed Punch.

An Example of Made In Heaven's Passive B.

Made In Heaven using Backhand Slash.

Made in Heaven using Light Speed Thrust.
Add a photo to this gallery 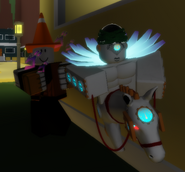 Made in Heaven's Current Pose.

Made in Heaven's pose in the Manga.

Made On Hallows Eve's pose.
Add a photo to this gallery

Made In Heaven Being Born By Pucci in the All-Star game for JoJo's Bizarre Adventure. 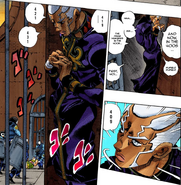 Pucci Counting His Prime Numbers in the Manga. 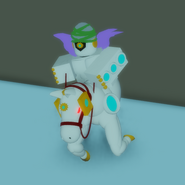 Made in Heaven's older model. 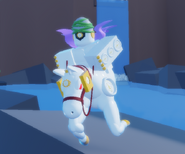 Made in Heaven's old model.
Add a photo to this gallery

Please hit "expand" to see a list of sound for Made in Heaven.

When someone hits you with Prime-Number Counting.

Retrieved from "https://a-bizarre-day-roblox.fandom.com/wiki/Made_in_Heaven?oldid=517685"
Community content is available under CC-BY-SA unless otherwise noted.