Locations/Special areas are places in the ABD map. Some places could be found simply since sometimes it could be seen in plain sight or due to the size of the location. For example, Tom's Thrift Store and The Bizarre Park are places that are big enough to be noticed. Some places are located in a bigger area, for example, the Angelo Stone and the Metro are all places that are located in Bizarre Park. However, some places are inaccessible or just very hard to get to. For example, The Sovlet Island is only accessible to the developers/moderators/admins of the games. Some places are deleted, and are no longer/can no longer be found on the map, for example, Kars' Cave. Items doesn't spawn at specific locations every single time, as they have different Spawn Locations for different items and other alternative spawn location for the same item. 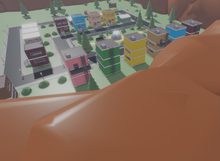 Angelo Stone
Add a photo to this gallery

Locations in older versions of ABD:

Grassy Bay
Add a photo to this gallery

A Bizarre City (Map)
Add a photo to this gallery
Retrieved from "https://a-bizarre-day-roblox.fandom.com/wiki/Locations/Special_Areas?oldid=419319"
Community content is available under CC-BY-SA unless otherwise noted.