"This is a trial... The trial of defeating my past... I accept it. In order to grow, we must defeat the mistakes of our past." - Diavolo (Diaboro, ディアボロ)

You can obtain it by using a Frog on Two Arm Doppio King Crimson with a 1% chance. This stand is a replacement of King Crimson's previous Shiny: Sans Crimson.

King Crimson (Manga Colour Scheme) is a humanoid stand with a diagonal grid over his body, same for its face, neck, shoulders, hands, knees, and feet. His sub-stand, Epitaph, can be seen on his head. The body is seen mostly as red/orange, but the grid is yellow. The eyes for Epitaph and King Crimson (Manga Color Scheme) are green.

His hands have iron knuckles on it, though his actual knuckles are green. The grid can actually be seen if you put your camera in it. The head is facing sideways. However, if you attack with it, it will face forward, and the stand user will face sideways.

Due to the fact that King Crimson's attacks are incredibly mighty, it can be used to easily end basically anyone, given that you run away when you need to and attack when it's ideal. The kick move (Y) is very useful for beginning and ending combos, as it momentarily suspends the target in midair. Although its durability stat is E, it still has the equivalent of B in health.

You shouldn't under any circumstances let your Future Sight (T) build dust over time. It can easily be used to save yourself in unfavorable situations or to approach your target safely(obviously unless you're against a gold experience requiem or over heaven stand, in which case the best idea is to just run for your life). To set up possible ambushes or assaults, you can use your Time Erasure (F) to traverse the land easily mostly without disruptions (again, if you're against a gold experience requiem you're basically screwed). Moving along, Erasure Shift is astoundingly useful for setting up potential attacks or literally just running. As aforementioned in the King Crimson stand page, (if you've read it) you can teleport through players (and small objects). This may or may not be useful, but I can see it being used to confuse the enemy for a short period of time, creating free space to throw another attack in, possibly ending the fight, right then and there. Time Erasure also allows you space to run away or lay the groundwork for surprise attacks. This move is great for escaping/avoiding fights to regain health. This move also allows you to use your J move. But if you attack during time erase, your time erase will be canceled. If your J move's cooldown is not over, you will only cancel your TE. 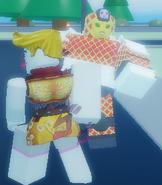 King Crimson as shown in the Manga, hence the name. 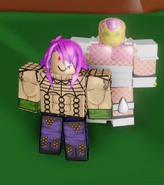 Pink Crimson, a version of the stand that existed before Sans Crimson. 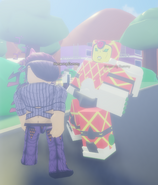 King Crimson (Eyes of Heaven) and the user posing after the Stand remake.

Time Erase with Manga King Crimson.
Add a photo to this gallery
Retrieved from "https://a-bizarre-day-roblox.fandom.com/wiki/King_Crimson_(Manga_Color_Scheme)?oldid=400335"
Community content is available under CC-BY-SA unless otherwise noted.