A Bizarre Day (Roblox) Wiki
Register
Don't have an account?
Sign In
Advertisement
in: Stands, Shiny, Semi-Canonical,
and 7 more

"Let us take care that this victory does not lead to future defeats." - Amakusa Shiro (Amakusa Shirō, 天草四郎)

25% of damage
King Crimson: Alternate Universe, often shortened to KCAU, is the non-canonical version of King Crimson that appears in the light novel: Jorge Joestar, a non-canon story in the JoJo universe. Due to the fact that this stand is non-canon, its movesets, appearance, models and voicelines are all original, inspired or taken from other different sources. This Stand also has a shiny counterpart: Sans Crimson: Alternate Universe.

King Crimson: Alternate Universe's main abilities consist of different punches and strikes, all of which deal a high amount of damage. It also has a sub-stand named Epitaph, which grants the user immunity to most stand abilities and moves when activated.

Its eyes comprise of sharp orifices of a steep inward slant; from which emerge small, round eyes. Its crown is flat and from its forehead emerges a raised level that bears a smaller, oval face of the same expression.

The aforementioned second face on King Crimson's forehead is named Epitaph. Epitaph presents itself as a bump on the forehead featuring eyes and a mouth, often mimicking King Crimson's current mood.

Sans Crimson's appearence resembles its normal counterpart very similarly, with a few modifications to the color scheme and a different face and epitaph textures.

King Crimson: Alternate Universe is capable of providing constant offensive pressure against any opponent, thanks to its extraordinarily high maneuverability and damage output, while also providing even defense with Epitaph (T) and Time Erase (F)

While lacking any ranged moves and having rather poor durability, this is balanced out by KC:AU's potential to straight up avoid damage while keeping up with an opponent, notably via KC:AU's most unique move, its Slide (C). Having a lower cool down than a roll, users are able to quickly avoid damage at crucial times, or suddenly close on on an opponent while dodging almost anything the opponent throws back, usually in a literal sense. KC:AU's Stand Propulsion (Z) also covers much more horizontal distance compared to other Stand Jumps.

If a KC:AU user is on low health and wishes to finish off their opponent quickly, Alternate Time Erasure (F) allows them to attack their opponents without any repercussions, as the ability makes users completely immune to most damaging moves, while granting them a speed boost and invisibility. Alternatively, Future Sight/Epitaph (T) also gives users temporary invincibility, minus the ability to use damaging moves. However, this can be toggled off any time during its activation, allowing for surprise attacks. Wearing sunglasses on your Roblox avatar makes your opponents not know if you cancelled your (T) or not.

Regarding KC:AU's offensive moves, Heart Strike (Y) is most punishing, allowing you to immobilize, throw and stun- lock your opponent, creating windows for combo opportunities. Both Mighty Blow (E) and Severing Chop Rush (R) deal an impressive amount of damage; While (E) ragdolls an opponent, (R) does not.

KC:AU's Slide and Stand Propulsion allows you to either get into battle or away from battle quickly no matter in what kind of situation you are in. This is used to keep your opponent on their edge constantly as with the slide you can easily catch up to them or use a quick attack giving the opponent little time to react to. KC:AU's moveset may be small but can be used to deal a tremendous amount of damage in a short amount of time. This especially includes a move called Heart Strike. Heart Strike is the best move that is in KC:AU's attacking moveset which grabs the opponent and deals an amazing amount of damage to them without allowing them to use any moves. Heart Strike also cancels the enemy barrage and ignores Block.

Moving onward, another great attacking move is the Severing Chop Rush that does a total of 3 chops that deal a good amount of damage per block that doesn't slow you down unlike a barrage which most stands have. And finally, KC:AU's Defensive moves include Future Sight and Alternate Time Erasure. Epitaph allows you to ignore the damage for a long period of time allowing you to run or trick your opponents into using their moves, and Alternate Time Erasure allows both Defensive and Offensive pressure as it forces your opponents to not see you while you can still use your Mighty Blow and Severing Chop Rush without Repercussion.

The main counter to KC:AU includes Gold Experience Requiem as it can use its passive ability to counteract your Time Erasure, as well as Gold Experience Requiem's glide giving great speed. And it's two ranged abilities countering your weakness to ranged moves. Another strong counter is The World: Over Heaven as their Reality-Warping Knife and Reality-Shattering Bolt can keep the range between you and the opponent. However, you can easily get to them by using Z and C. 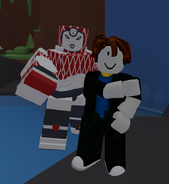 KC:AU and its user menacingly posing. 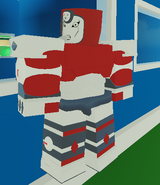 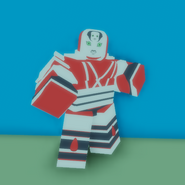 "Well, that will do for now..." "I shall take care that this victory does not lead to futures of defeats."